Why You Should Be Using KISSmetrics with WooCommerce

This is a guest post from Jason Glaspey, founder of PaleoPlan.com and co-founder of the Portland Incubator Experiment (PIE). Jason enjoys working to build small startups and helping to make it easier for people to follow a Paleo diet using Paleo Plan.

It took me several years of selling products online before I really began taking steps to understand my audience and to truly attempt to optimize my site and store for conversions. Part of the reason was I was overwhelmed with other tasks, but that was mainly just lip service. The real reason was I was a bit nervous and scared. Of what? Mainly what I didn’t know–this was an area I had very little experience, and it’s always easier to focus on what you’re good at than what you’re bad at. That’s where KISSmetrics analytics for WooCommerce comes in.

I understand the theory of a/b testing, and the theory of understanding Lifetime Customer Value, but I didn’t really know how to truthfully go about measuring them, nor what tools I could use, or if I could even get those tools properly set up. So I ignored those metrics and a host of other important data points.

Then, after 3.5 years of running Paleo Plan, I finally realized that I’d solved most of the problems I was good at, and it was time to start solving problems I wasn’t good at. So, I bit the bullet and took my first serious look at KISSmetrics.

What did I find out? It’s incredibly easy to set up.

And BANG! Just like that I had a working version of KISSmetrics, helping me identify a HUGE number of data sets that were previously either completely hidden in Google Analytics, or were just unavailable to me due to the fact that I wasn’t a developer and wasn’t able to pull the types of complex reports I needed.

Here’s an example of one dashboard I have set up in KISSmetrics. 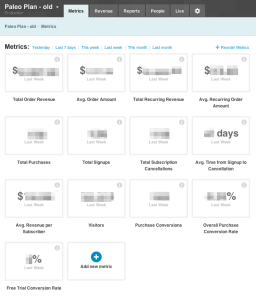 You can quickly tell your current revenue, free trial conversion rates, signups, cancellations, on and on and on. And this is just one of the dashboards.

I wish I’d figured out much earlier that this was so easy to set up, and would have started collecting user-data even if I wasn’t ready to be acting on it. Because now, I only have the data since I installed the extension and turned on KISSmetrics, rather than years of historical data that could have shed light on a number of other things. However, moving forward, I’m collecting data, and can learn more about KISSmetrics, what numbers and data points I want to compare or analyze, and be able to go back and see reports from now on, even if I’m not running those reports at the moment. That’s the beauty of collecting raw data, I don’t even know what reports I may find useful later, but I’m at least collecting the information so I’m able to move forward when I’m ready.

However, I’ve already found several things useful, and used it to immediately identify some weaknesses in my sales funnel and have thus increased my conversions and as such, my revenue.

You can get the KISSmetrics WooCommerce extension here.
You’ll need a KISSmetrics account, which you can sign up for here.

Jason is the founder of PaleoPlan.com and Factory, and co-founder of the Portland Incubator Experiment (PIE). Jason enjoys improving digital publishing, working to build small startups, and guiding new entrepreneurs in exciting projects.