It’s been quite some time since we took a look at growth and marketshare of WordPress eCommerce plugins, so today I’d like to revisit some statistics on plugin usage and compare data from BuiltWith.com and WordPress.org.

We’ve written two overviews in the past on WordPress eCommerce plugin usage in January 2015 and June 2015, so we’ll revisit these statistics after a little over a year to see how they’ve changed.

There are several eCommerce plugins available for WordPress, so we haven’t included every possible plugin or membership solution. I’ve tried to include the most popular and / or actively-developed plugins, along with those I can get statistics on. However, not every statistic is created equal, so here are some notes before we get started:

Dropped from this year’s list is WP eShop, which is no longer available in the WordPress repository.

While that covers caveats from the tracking side of things, we should also be aware of pros and cons of BuiltWith and WordPress.org statistics as a whole.

A good question as we go over this data is, “Which one is better?” Unfortunately, there’s not a “right” answer there; each source has some positives and negatives to using it.

BuiltWith provides data on almost every eCommerce plugin, as it’s tracking these by scraping data from the site frontend / page source. This helps for plugins that aren’t available on WordPress.org. However, because it’s tracking all sites, it may be including duplicate or staging sites in its metrics. It also may be missing some sites that remove the identifying information for a plugin, so it’s hard to know if the missing vs duplicate sites “balance out”.

As for WordPress.org, this tracks active installations, and attempts to remove duplicate or staging sites from this data by paying attention to the site name or IP address. This process isn’t perfect, so there still may be duplicates here or other development sites that are included.

Once usage tops 1 million, WordPress.org stops displaying increases, so you don’t know if there are 1 million or 5 million sites using the plugin. I’m also not sure if the WordPress statistics track sites with the plugin installed, or installed and activated.

Using both can at least give us some insight into relative usage and the percent change in usage over time when we look at our previous data.

As we said previously, WooCommerce is leading the way here, followed by Easy Digital Downloads and WP eCommerce neck-and-neck.

For plugins listed below the divider in this table, remember we may have some trouble tracking them accurately (see notes below).

*WordPress.org only shows 1 million+ for any plugin with over 1 million installations, regardless of actual installation number.

**only includes the free version of the plugin, not the pro version as BuiltWith does

^ The statistics for Cart66 and Ecwid are included, but it should be noted that the BuiltWith statistics and WordPress.org are tracking different values. BuiltWith tracks all installations, and in the case of Ecwid, these could be non-WordPress sites. I’d trust the WordPress.org statistics more for these, as this number tracks the installs for the WP integration plugins for each, which better shows WordPress sites using these.

Within the data gathered from BuiltWith, there are 1,725,247 total sites being tracked using WordPress with an eCommerce plugin.

As we saw above, the majority of those sites are using WooCommerce, which is making up 92.2% of this count.

Again, Cart66 and Ecwid may not be fully accurate here since we’re not sure about their BuiltWith statistics being accurate for WordPress sites, so that would influence this break down a bit and slant a higher marketshare towards WP eCommerce and EDD.

So while it’s obvious WooCommerce is taking up a large chunk of that pie, let’s see what the breakdown looks like if we remove it from the equation.

If we remove WooCommerce from the data set, we’re now looking at 134,652 sites tracked via BuiltWith.

We can see that the vast majority of sites use WP eCommerce and Easy Digital Downloads, along with Ecwid. Again, however, this has all Ecwid sites tracked, so it’s probably a much lower percentage than we see here.

To try to remove the overstated influence of hosted platforms in that breakdown, we can also look at the estimated 137,900 sites tracked by WordPress.org instead. This may be a bit more relevant, as it’s only tracking usage of WordPress plugins themselves, not the platform as a whole.

So in this light, we see that WP eCommerce and EDD are most likely eating up the large majority of non-WooCommerce sites.

Now the fun part: let’s see how WordPress eCommerce plugin usage has changed over the past year to see a percentage increase or decrease. We’ll take a look at BuiltWith data first, along with percentage change.

The growth for both WooCommerce and EDD is pretty tremendous. WooCommerce has more than doubled usage, while EDD has picked up over 60% more sites since June 2016.

The rest of the WordPress eCommerce platforms are down in usage (and Ecwid again is tough to read, as we don’t know if that growth was within WordPress), but the WooCommerce growth has driven an increase in WordPress usage for eCommerce as a whole.

This most likely means that merchants who previously used other platforms could be migrating to WooCommerce or EDD instead, as other platforms have declining user bases.

We can also take a look at WordPress.org metrics, though these are estimated, and the data for WooCommerce isn’t as relevant (so I’m not going to add percentage change here).

Before we wrap up, let’s throw one final, fun metric into play here. The usage for the Shopify WordPress connector plugin stands at 6,000+ installs according to WordPress.org. This would make Shopify one of the top eCommerce providers for WordPress as well, most likely behind WooCommerce, WP eCommerce, EDD, and Ecwid.

While eCommerce with WordPress is growing overall, this growth is definitely driven by WooCommerce and Easy Digital Downloads, as the usage of many other plugins has declined in the past year.

WP eCommerce and Jigoshop haven’t had much active development within the past year, while Shopp has been inactive for some time, so this may contribute to the decrease we’re seeing.

WooCommerce being acquired by Automattic also most likely has some influence here, as it’s growth rate seems to have increased after the May 2015 acquisition (though we’d need better data to confirm this): 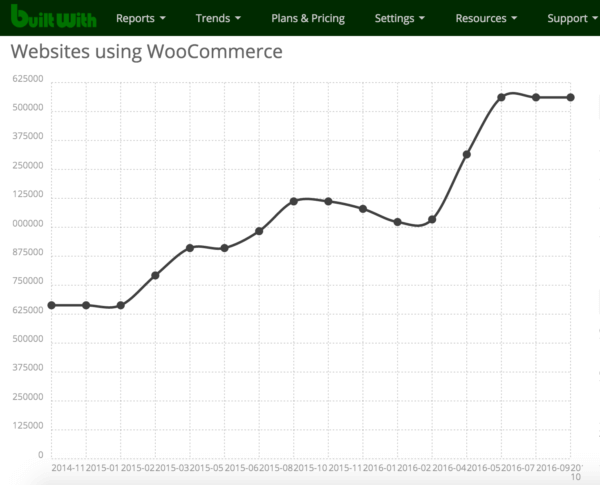 In short, it’s a great time to be involved with using WooCommerce or Easy Digital Downloads, as they haven’t lost a beat in popularity over the past couple of years.

Note: This post may contain affiliate links, which means we get a commission from the plugin, theme, or service provider if you choose to purchase. Regardless of this, we are committed to providing high quality, unbiased resources. Have more questions? See our affiliate policy. You can use the plain links below if you prefer that we not receive a referral commission: