WP eCommerce is one of the most mature eCommerce solutions for WordPress, but its growth and core development have slowed in the past couple of years. New users sometimes had difficulty finding the extensions or themes they needed to create the store that they wanted, and the plugin had almost a decade worth of code that made both maintaining backwards compatibility and compatibility with newer versions of WordPress challenging.

With the version 3.9 release last week, a new approach, brand, and ecosystem have been launched, and over 70% of the codebase has been rewritten to improve performance and lay better groundwork for future updates.

While the WP eCommerce 3.9 release implements some huge changes (including some changes to the ecosystem we’ve covered), the previous 3.8.14 release actually contained significant internal changes as well. We’ll go through some of what’s changed in each release, and what users will see when using the newest version of the plugin.

Let’s back up for just a second and talk about the previous v3.8.14 release. One change from this version that I did like was the updates to the Add / Edit Product page, as the UI was greatly simplified and improved. Prior to this version, there were about a million meta data boxes that you could fill in for products, which could be confusing and time-consuming while creating products. 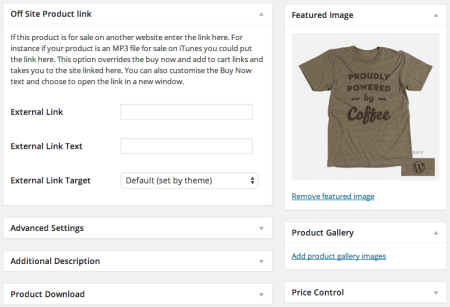 In v3.8.14, this page has been simplified and is far easier to navigate. Most of this information is grouped more appropriately into tabbed boxes instead: 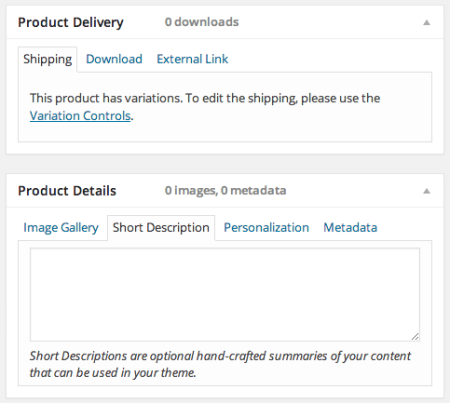 However, users probably didn’t notice much else going on with the version 3.8.14 plugin release, but the plugin architecture changed massively. The development team is paying off a lot of technical debt that’s built up over the years while still maintaining backwards compatibility to avoid breaking changes. The changes made in this version have improved performance and stability, as hundreds of bugs were fixed and changes made.

The customer meta API was entirely re-architected, and several shipping and tax fixes were included. Many of these changes paved the way for the version 3.9 release, which makes even greater strides towards reviving the platform’s growth.

Lead Developer Justin Sainton has stated that their goal is to “provide developers with the best, most robust, most extensible platform for building eCommerce sites.” The changes in v3.9 keep this goal in mind. Justin elaborated on these changes:

With our new theme engine, we’re providing one of the most UX-driven theme frameworks for eCommerce that exists today. It’s a breeze to work with and to create themes for, and we’re anticipating significant growth in the premium theme market now that this is part of our core platform.

With our new payment gateway API, we’ve introduced a modernized API that no longer reeks of the days of PHP4 compatibility. It’s a first-class citizen in our developer ecosystem.

Finally, tying it all together, we’ve officially launched our developer marketplace. This marketplace is pretty neat. It allows developers to create premium plugins for WP eCommerce; host, tag and manage releases through BitBucket or GitHub – and sell directly on WPeCommerce.org and right within the WP eCommerce plugin. It’s an revolutionary step forward for us and we anticipate that it will be an incredibly invigorating year for our developer community.

The theme engine is exciting, as finding WPeC themes can be challenging and I’m hoping this spurs on more quality theme development. While this is inactive in WP eCommerce 3.9 (but can be activated), refining this and activating it will be a focus for version 4.0.

Including themes and premium plugins in an in-app marketplace will be a huge convenience boost for users, and makes it far easier to find trustworthy add-ons. The Payment Gateway API will also lead to improvements that users will benefit from, as payment gateway development is facilitated.

The most significant change in this release is the re-brand and restructuring around the plugin to create a stronger ecosystem. WP eCommerce officially brings Justin Sainton on as the lead developer with this release as a co-owner (along with Dan Milward) invested in the platform and ecosystem growth. Having a leader on the development front will help drive the plugin forward, as this was sometimes missing in recent years. A united brand, renewed leadership, and official ecosystem are all aimed at jumpstarting growth.

This official ecosystem is a major part of the change. Previously, the premium plugin marketplace was located at GetShopped.org, which could be confusing for customers that were looking for information about WP eCommerce and expecting to see a brand around the plugin. Now, all premium extensions, support, and information is located at WPeCommerce.org. 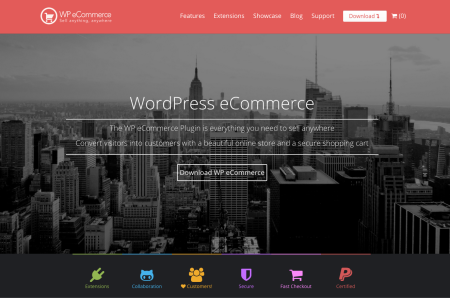 Purchasing add-ons was also inefficient, as customers couldn’t access licensing information and API keys upon checkout. Now user accounts are created so that it’s easy to access downloads, licensing information, and support. This also bring everything else, such as documentation, under the same roof, greatly simplifying shop management for users.

WP eCommerce is also partnering more closely with trusted third-party developers for add-ons so that customers have the tools that their stores need. A major benefit to this is the inclusion and expansion of an official marketplace.

WP eCommerce has always had premium plugins available, but there was a distinction between “core” add-ons and “community” add-ons. This is now gone in favor of an official marketplace, where both add-ons from the core team and vetted plugins from other developers are available.

This provides a great resource for customers so that they can find quality extensions for their stores, and these add-ons will consistently be supported and maintained. Customers no longer have to go to several different developers to get support or information about plugins individually.

Using WPeC 3.9, users will be able to access the plugin marketplace directly from their WordPress dashboards:

Even better, they can purchase directly from within WordPress using their WPeCommerce.org accounts. This makes purchasing and installing extensions completely seamless. 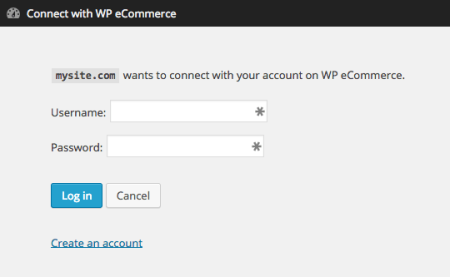 The new WP eCommerce 3.9 add-on marketplace is powered by WPEconomy (an Instinct creation), and allows users to search for add-ons; view featured, new, and most popular add-ons; or view add-ons by lowest price.

Aside from the massive ecosystem changes and code refactor, WP eCommerce 3.9 also adds some new features. Your customers can now checkout with a cart total of $0, which was an issue for many shops in the past.

A new payment gateway API is included in this version, which makes it far easier for developers to add and manage payment gateways. While this isn’t something you’ll really see as a shop owner, it lays the foundation for better payment gateway integration. The core payment gateways were also updated with this change. The manual gateway, along with PayPal Digital Goods, have been added as well. 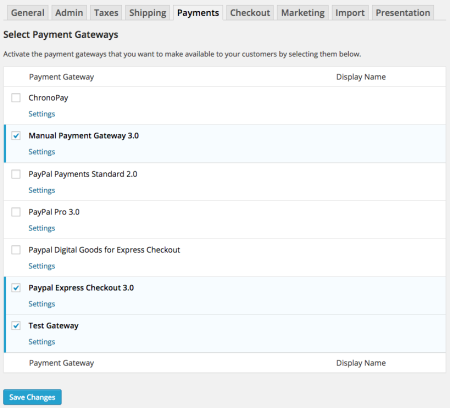 Coupons have been improved, as they no longer require expiration dates. If you’d like to create a “permanent” coupon, you can now simply omit starting and ending dates.

Finally, v3.9 includes the new theme engine, though this isn’t active since it’s being refined for the 4.0 release. This includes frontend improvements that simplify the customer experience and will make it far easier to theme the plugin. While the theme engine components aren’t set in stone, here’s a preview of some coming adjustments that you may see in version 4.0.

The shopping cart features a cleaner layout, and makes adjusting the cart easier for customers along with making it easier to style within themes. 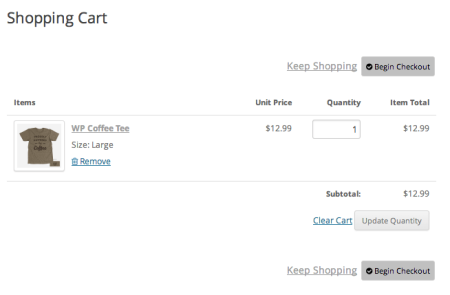 The checkout process has also been changed. A multi-step checkout is now enabled by default, which will help some international sellers (for example, German stores are required to have this). Breadcrumbs for the process are clearly noticeable so that customers know exactly what will be required to complete checkout: 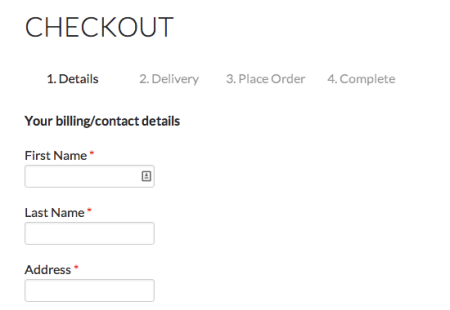 While not every change in this release is user-facing, I’m really impressed about the changes that have been made for WPeC shops. The in-app marketplace is a big win in my mind, as users will have a centralized, trusted location from which they can easily get themes and plugins. This is also tied into the re-brand that’s meant to revitalize the ecosystem and provide a centralized, trusted source for plugins, themes, and support.

Other changes are “under-the-hood” with this release, such as the payment gateway API, huge codebase improvements and rewrites, and the in-progress theme engine. While users may not necessarily see every aspect of these changes in action, they’ll benefit from improved shop performance and payment processing capabilities as developers implement these changes. These long-term plays are important investments in the plugin’s future, and provide a far more stable base on which to build.

The WP eCommerce 3.9 release, along with the changes to Instinct and the ecosystem, keep WPEC moving in the right direction and will hopefully spur on more growth in the premium marketplace.